Ok, these are commonly known as Amaryllis but the correct name is Hippeastrum. Here are a few photographed at last year’s RHS Chelsea Flowers Show. Now is a good time to get your hands on some as these bloom in spring. Go here for easy Hippeastrum care information. 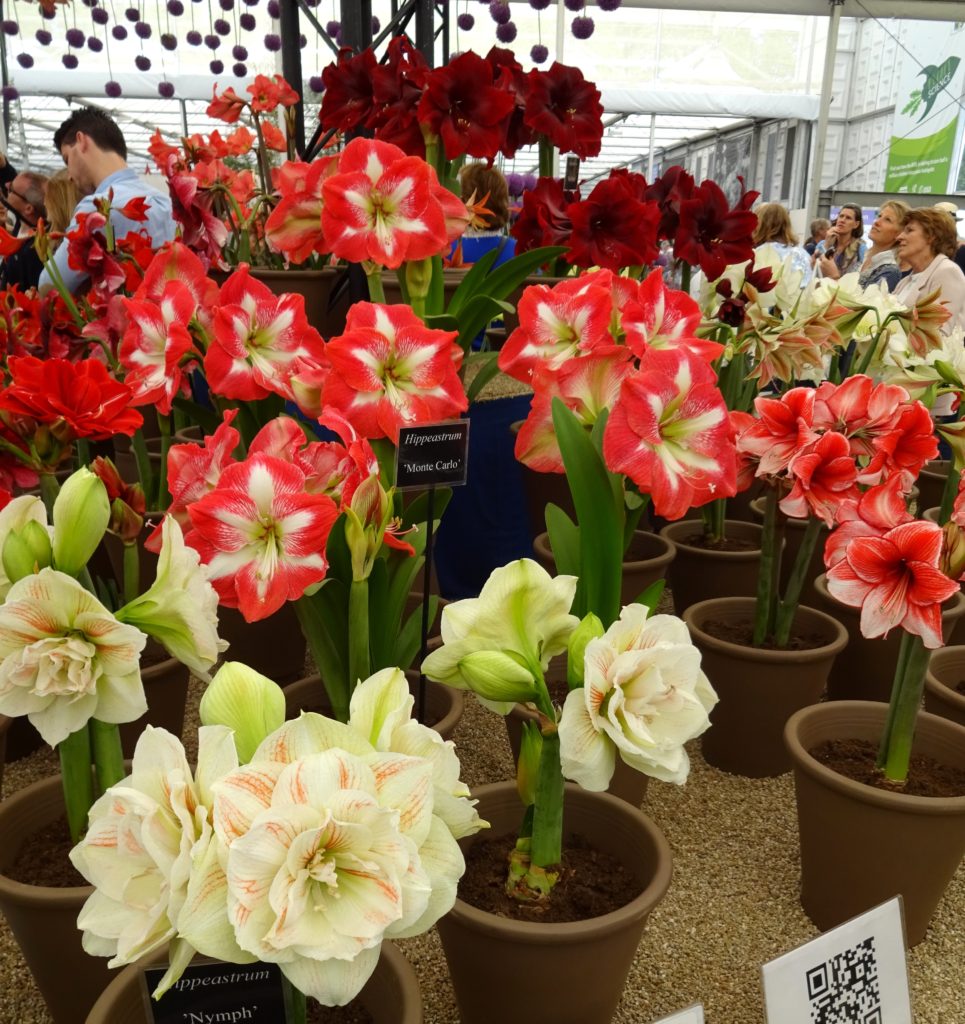 These bulbs from Dutch growers were a crowd-pleaser. 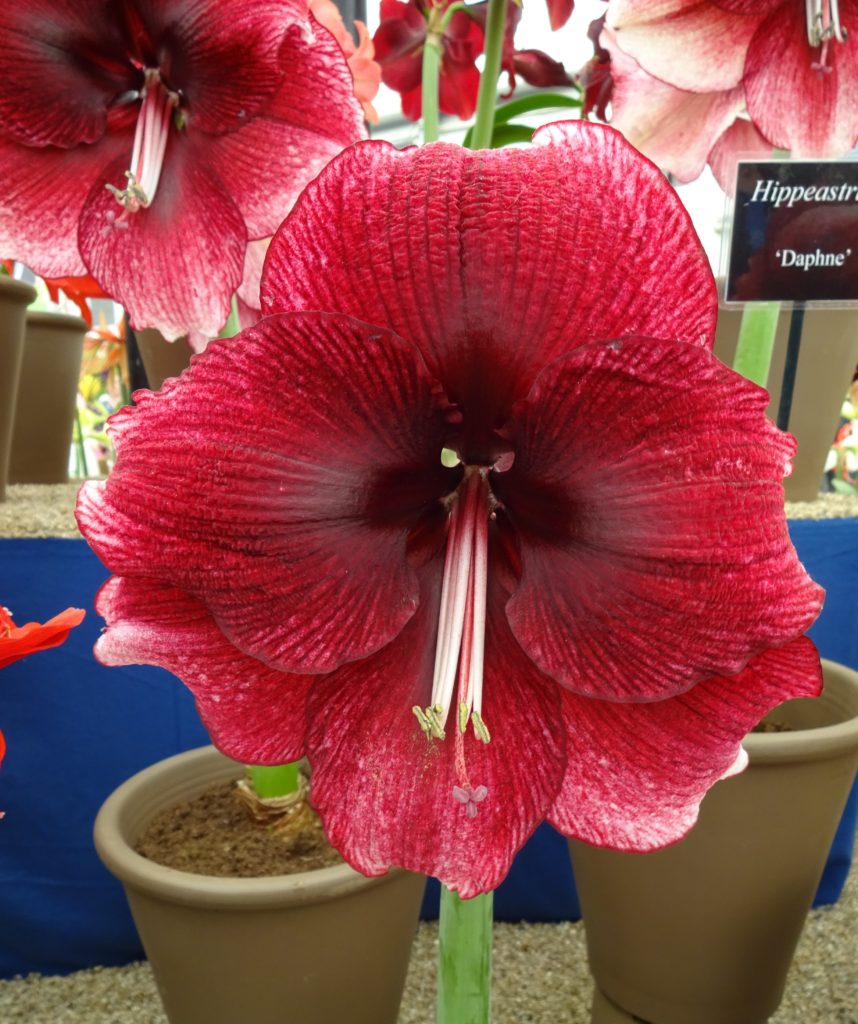 Well, one of the indoor gardener's first sign that winter is on its way out,  is the appearance of buds on Amaryllis bulbs.  So, here is a multi-bulb pot of Amaryllis Scarlet Baby emerging from dormancy. If you can't make out the buds look  for the lightest yellow coloured areas amidst the foliage--yup, those are the buds! And they are emerging from all four bulbs. They are pale as they've been in a dark storage room but will green up in light.  As you can see they look dead and dry to the world, but will soon spring back to  life with a little warmth, light and water. We'll post  a picture when they bloom but if you would like a sneak peek, head over to our Amaryllis bulb website. 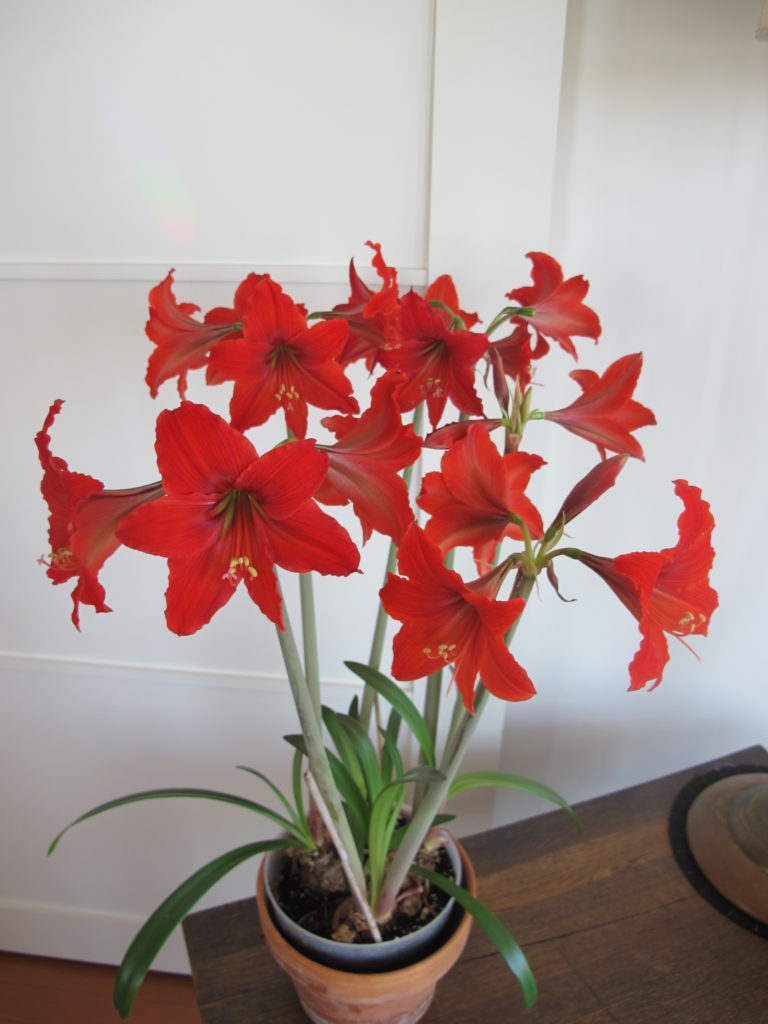 A new addition to our Amaryllis collection, the deep cranberry red flowers of Amaryllis Benfica are simply astounding! This bulb is now on its third flower spike of velvety excess. Enjoy with a glass of Merlot and fine chocolates to complete the experience. Who knew nature could be so beguiling?

What more, this Amaryllis no more difficult to grow than that other types. Find out how to grow and flower these exotic amaryllis amaryllis for years to come.

Amaryllis Chico is one of the more exotic members of the Amaryllis family, with its arresting spidery blooms. It belongs to the cybister group of hybrids and only became commercially available in the 2000’s. These are sometimes hard to find as they sell out quickly so get yours early in the season.

They are definitely a more compact growing Amaryllis with much smaller bulbs(and flowers) than standard Amaryllis–the bulbs are about size of a small apple.

The bloom stalks and buds seem to be a bit slower to develop but the flower are visually arresting and make a nice change from the more flamboyant standard Amaryllis.

I recently order this bulb online along with a few other Amaryllis. It is already in  bloom with four flowers and a another stalk not far behind!  However, its got unusual red markings and overlay on a rather pale background than I’ve ever seen in Lemon Lime which is usually a nice smooth color with almost no red pigment, if any. (See a photo of the true Lemon Lime.)

I contacted the source, Willow Creek Gardens who responded quickly  said they were seeing the same thing in the Lemon Limes they had bloomed out!  They were getting in touch with their grower to figure what was going on.  In the meantime, they offered to send me another Amaryllis as a replacement , which is what I expect a quality retailer to do. I selected ‘Beneficia’ which is on the opposite side of the color spectrum, a deep rich burgundy red.

” you  might want to include in your blog the sad fact that the number of amaryllis growers worldwide has shrunk – one of the biggest declared bankruptcy last year and this is the first year we’ve seen the effects on the market — prices have risen.  This  follows a  year when  all vendors were receiving unprecedented numbers of mis-labeled amaryllis bulbs from  the growers and brokers they  had dealt with for years.  In some cases, it even seems that some highly prized hybrids were just shipped under some ordinary varieties name.”

Likely, the global economic recession has had much to do with this, but possibly there is also  some shake-out also going on in the industry. When it all settles down, lets hope the top quality growers and suppliers float to the top.  Dedicated breeders spend much time with a toothpick, painstakingly creating new hybrids. Then, selecting and multiplying amaryllis for commercial release is a time consuming process that can take almost a decade, in some cases. Growers, brokers and retailers have a responsibility to maintain high standards so that consumers, without whom there would be no amaryllis industry, are satisfied with the bulbs they receive, and of course, the flower quality.

Back to the Lemon Lime, the question remains whether this is a) another hybrid b) some sort of sport of  lemon lime, or the result of c) unusual temperatures or other growing factors that affected  the plant at the cellular level when flowering was first initiated? If you have any ideas, please let me know by leaving a comment below.

Who doesn’t love the trumpet blooms of Amaryllis during the dreary winter months? Now available in an amazing range of sizes and colors, from huge flowers 8″ or more across to smaller delicate clusters of blooms, there is an Amaryllis to suit every taste. Amaryllis make great house plants if you can provide them with bright direct sun. If you don’t have a sunny windowsill, but have a sunny balcony or yard, you can still grow them as house plants over the winter and spring months (which is when they flower). The rest of the year they can be grown outdoors.

With a little care, Amaryllis will bloom every year from from winter through spring. In time with good care, you will be rewarded with up to three flower stalks in succession, each with 4 or more blooms!

I recently bought a few more Amaryllis bulbs to add to my collection in a moment of weakness (see photo below). I got two cybister Amaryllis bulbs, which tend to have spidery blooms (‘Chico’ and ‘Bogota’) and a more exotic look than the traditional Amaryllis. I also bought ‘Lemon Lime’, a shorter-statured beauty with flowers in lime-yellow to soft green. As you can see, the cybister bulbs(and thus plants) tend to be smaller than the regular-sized Amaryllis, and are better suited to windowsills or apartment culture. I’ll post photos when the bulbs start to bloom!

Learn how to pot up and care for you Amaryllis bulbs.