Unbeknownst to most of us, the Chinese have been cultivating Clivias for more than half a century now but have gone in a very different direction than here in the west. The Chinese clivias have been bread for their leaves; short, wide, round-tipped leaves with uniform inter-venal patterns on a ‘fan shaped’ symmetrical plant are highly valued, often to the tunes of several hundred dollars.  The flowers themselves are secondary to the foliage! With descriptions such as ‘broad leaf monk’, ‘malian’, ‘oil miller’  and ‘painted face’ there is an entire lexicon around these most intriguing of clivias that Chinese breeders have made their life’s work. 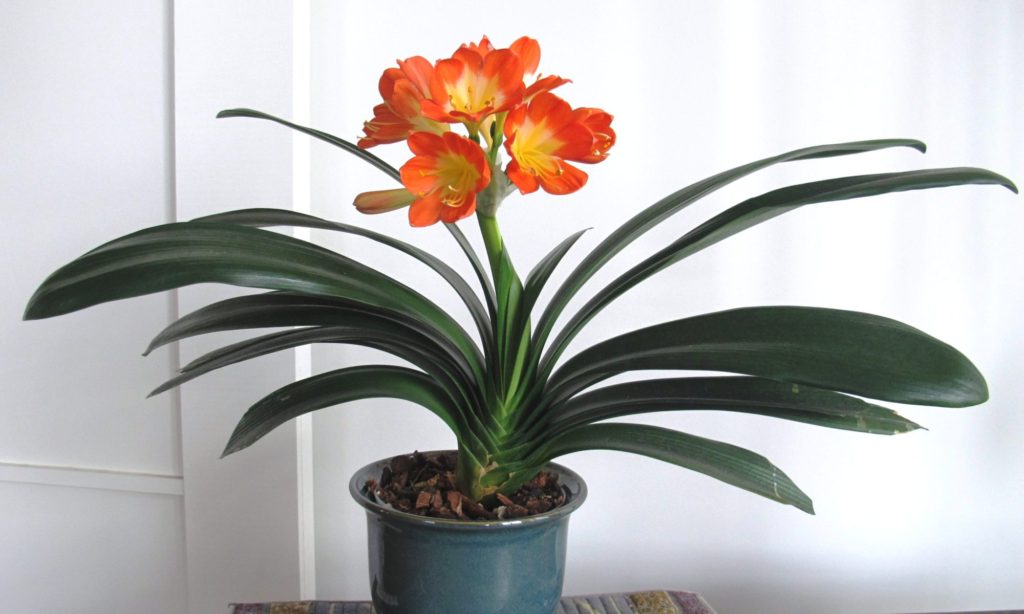 What has intrigued me the most is the compact nature of the Chinese clivias. Standard clivias grow up to be large showy plants that take up a lot of room. The Chinese ones are about quarter to half the size from as little as a 12 ” wingspan up to only 22″  across.

A few years ago, I was fortunate enough to find three ‘Broad Leaf’ monk seedlings for sale in the US on ebay. One of them perished after a year, but the other two grew well and developed the characteristic fan-shape of the Chinese clivias. The one pictured here, that is blooming for the second time,  is about 22″ inches across. Its twice as large as the other one, which has yet to make its debut on this website.

I enjoy these plants both for their exquisite foliage and lovely blooms. I grow them the same as regular clivia, though they apparently have more specialized and exacting needs. One things they do seem to more susceptible to is root root–so I make sure not to water them excessively.  I also use a very open bark-based mixture, and I ensure that the base of the plant sits just above the soil level.  If you’ve grown and bloomed clivias before, you may want to try your hand at one of these lovely compact Chinese cultivars.