My Brassavola David Sander is in bloom again! This year I was rewarded with about 6 blooms sequentially over two months. This plant needs to get big before it bloom profusely, but the attractive elongated foliage stays contained so a specimen can be grown in a 5″ pot. See my earlier post on this orchid for more information.

Cattleya trianae is the national flower of Colombia and is among the largest and most beautiful of the cattleya orchid species. There are many different colors ranging from white to pink with variations in lip color to boot. It generally flowers in the late winter/early spring. This picture was taken in Cali, Colombia in February. The  orchid was growing and blooming high up in a tree. You can find out more about this history of this  orchid at Chadwick and Sons Orchids.

A few other orchids were also in bloom, but these were cultivated plants, though still native to the region. Below are two different types of Sobralia orchids. These plants that looks like grassy bamboo plants can reach from 12″ or 12 feet in height depending on the variety. The short-lived flowers, that may open at dawn ans spent by nightfall bloom in abundance. They are terrestrial, growing in the ground unlike the epiphytic Cattleya trianae.
Lastly we have Phragmipedium longifolium that was growing in a basket on somebody’s balcony. These are related to the Asiatic slipper orchids. However,  these plants enjoy slightly cooler conditions and like lot of fresh cold water at the roots. They bloom over many months on the same stem.

With snow on the ground, there’s nothing like the rich perfumed scent of a gorgeous cattelya orchid to remind you of your favorite tropical paradise where I know you’d rather be right now. One of my new favorites has to be Blc. Momilani Rainbow ‘Buttercup’ which releases its heady perfume all day and has flowers that last for weeks, which is longer than for most cattleya orchids. While the plant is not compact it s definitely on the smaller side compared to other standard cattleyas. So, if you have room on your windowsill, this is one ‘houseplant’ I would definitely recommend. 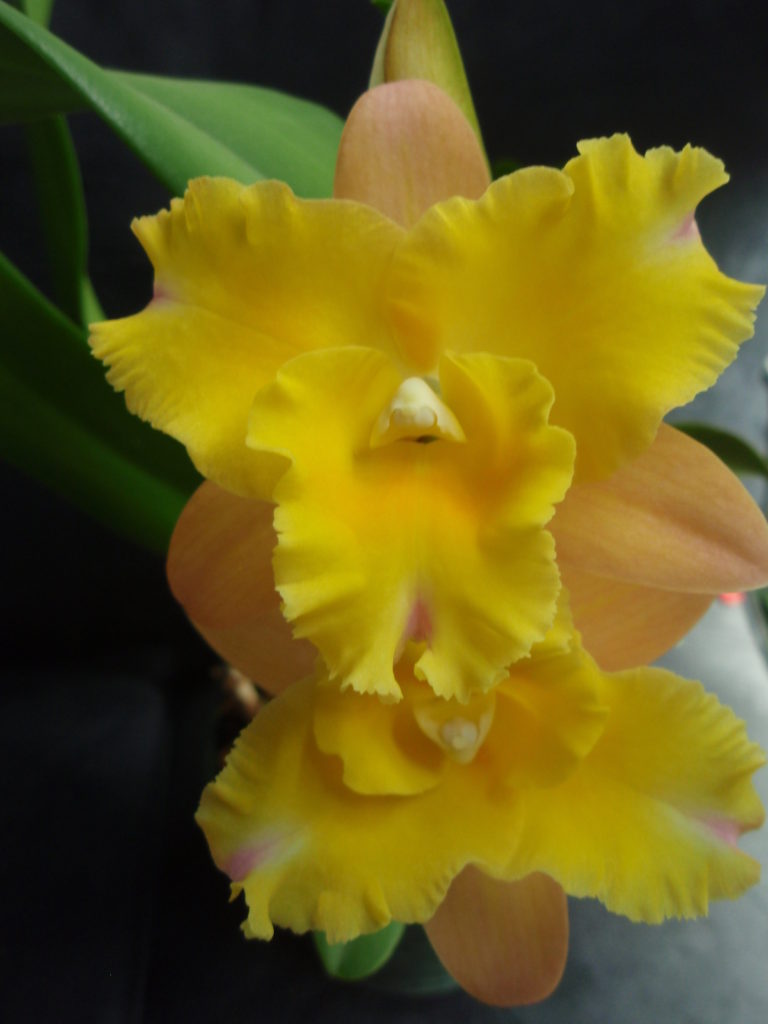 I purchased this gorgeous cattleya orchid at the NCOS Orchid Show that is on this weekend in Washington D.C. The large spotted waxy flowers held with their heady fragrance proved to be irresistible. There were about ten of these in bud or bloom being sold by Orchid Enterprise and most of them were snapped up quickly. I think you can see why.


For orchid nuts: This is a tetraploid mutation of the ‘Carmela’HCC/AOS clone.’Linwood’ received an AM/AOS

Feb27, 2011 update to this post. The orchid is now blooming with 11 flowers, in a 4″ pot! One of the growths has 5 blooms that shows you what this clone is capable of. It matured several growths without flowers, since my last post. The sheaths all dried up but then early this spring, buds appeared from almost all the dried sheaths! So the message here is never remove the sheaths, even if they appear dry. The flowers have a lovely fragrance to boot. This is definitely a keeper. And, by the way, I’m growing this orchid in a mud(peat-based) mix(pro-mix HP with added perlite).


Pot. Kat E-Sun ‘Caribbean’ (Sc. Beaufort ‘Elmwood’ AM/AOS 4N x Blc. Sunset Bay ‘ Miyamoto’) is a stunning orchid as you can see. Its in the Cattleya alliance. The Beaufort parent is a classic and brings plant size downs considerably–this is obviously a happy marriage with the Blc. Sunset Bay.

I grow this plant in a sunny south facing window year ’round. It is blooming in 3.5″ pot and has several strong growths and leads so will need repotting soon. It took about a year to bloom although it matured at least one or two growths in this period.

Often I find that many orchids with cyclical growth patterns take a while to adjust to your growing environment, especially if quite different from the one they were growing in before purchase. However, once they’ve settled in, they should have a more regular blooming cycle. This hybrid apparently blooms several times a year–something to look forward too!

Thailand has long been synonymous with orchids and for a good reason. Not only do orchids abound naturally, but there is a long history of orchid cultivation. Now, cattleyas, and other non-native orchids, are grown alongside local varieties. Wherever you go in Bangkok, you see orchids, whether in a fancy arrangements in a hotel lobby, hanging outside in front of a modest home, or simply growing epiphytically on trees for the pleasure of all who pass them.

These photos were taken in Thailand last fall, mostly at the weekend Chatachuk market where people converge to buy orchids, from cheap dendrobiums to highly sought rarities. (Also see our earlier post, Tropical Houseplants in Bangkok)

I’ve seen more cattleyas in Thailand then anywhere else in south-East Asia. Granted I haven’t been to Malaysia, but even in Indonesia or Singapore, they are not as common. Thai growers will have many different types for sale-they are so ubiquitous that they often do not have name tags attached!

Vandas are native to south-east Asia, but are slow growing plants. They demand bright light, heat and humidity and are grown to perfection in Thailand and other south-east Asian countries.

Below are some more unusual orchids. Paphiopedilums, phalaenopsis, bulbophyllums and many other unusual orchids can also be found at the weekend market.

(Below)This type of Vanda hybrid, probably a Mokara, is very common through south-east Asia. They are the equivalent of carnations (though much more exotic) and you will seem them widely used as cut flowers often in huge bunches. They come in a variety of colors from the yellow through red part of the spectrum, often in rich oranges and sunset shades with darker spots on the blooms.