Things are quiet at the USBG. Several sections are closed off for renovation and even the orchids appear to be in short supply as the USBG gets ready for its upcoming orchid show. Nevertheless, here are a few gems that caught my eye in the late afternoon sunshine. These are all generally orchids that like temperatures slightly on the cooler side.

I purchased this dendrobium orchid  at our local orchid society meet from a visiting speaker who grew them in Texas. This orchid comes from the Philippines where it likes the heat.

I was struck but the architectural beauty of the plant and its bonsai like appearance.  So  after it had  been growing in its pot for a few months, I slipped it into a bonsai pot.  The plant was growing in sphagnum but knowing that these cane-stemmed dendrobium often a appreciate a good drying it out, I potted it in clay aggregate while leaving the root ball intact within the sphagnum.

The plant has grown well and blooms every spring after the cooler night of winter. The tallest growth is about 18 inches tall. The tiny flowers last from 1-2 months! They have the texture of plastic and appear in pairs, hanging ‘upside down’. In nature, the plant would be growing on a tree with the long stems hanging meandering  down. The flowers, thus, would be the right way up.  This is one orchid that is very attractive even when not in bloom. As you cannot see, the plant has been very carefully staked to keep the growths more upright. There were twice as many blooms as shown in the photo below–I just waited too long to photograph it! 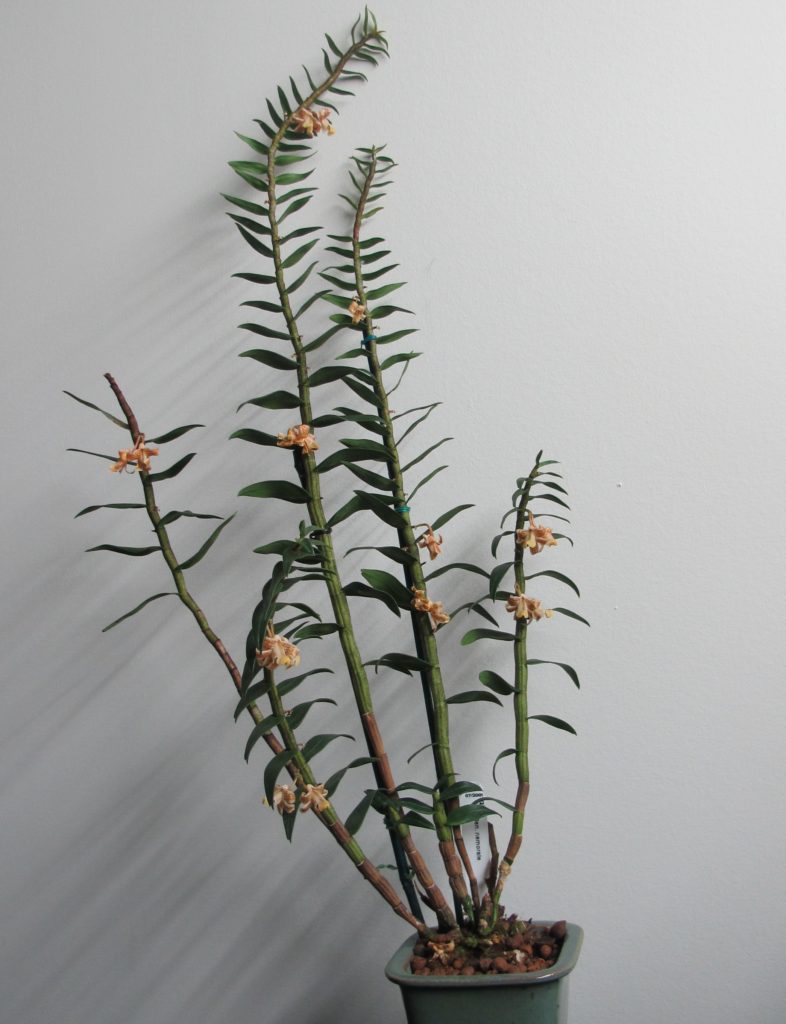 Thailand has long been synonymous with orchids and for a good reason. Not only do orchids abound naturally, but there is a long history of orchid cultivation. Now, cattleyas, and other non-native orchids, are grown alongside local varieties. Wherever you go in Bangkok, you see orchids, whether in a fancy arrangements in a hotel lobby, hanging outside in front of a modest home, or simply growing epiphytically on trees for the pleasure of all who pass them.

These photos were taken in Thailand last fall, mostly at the weekend Chatachuk market where people converge to buy orchids, from cheap dendrobiums to highly sought rarities. (Also see our earlier post, Tropical Houseplants in Bangkok)

I’ve seen more cattleyas in Thailand then anywhere else in south-East Asia. Granted I haven’t been to Malaysia, but even in Indonesia or Singapore, they are not as common. Thai growers will have many different types for sale-they are so ubiquitous that they often do not have name tags attached!

Vandas are native to south-east Asia, but are slow growing plants. They demand bright light, heat and humidity and are grown to perfection in Thailand and other south-east Asian countries.

Below are some more unusual orchids. Paphiopedilums, phalaenopsis, bulbophyllums and many other unusual orchids can also be found at the weekend market.

(Below)This type of Vanda hybrid, probably a Mokara, is very common through south-east Asia. They are the equivalent of carnations (though much more exotic) and you will seem them widely used as cut flowers often in huge bunches. They come in a variety of colors from the yellow through red part of the spectrum, often in rich oranges and sunset shades with darker spots on the blooms.